Debt and Relationships – The topic of debate between Dr. Karen Ruskin and Larry Winget on FOX News Channel’s Your World With Neil Cavuto 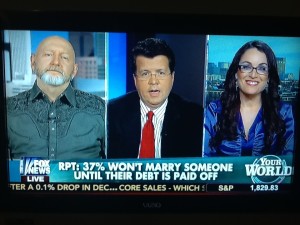 The National Foundation for Credit Counseling (NFCC) reported in their monthly poll of the respondents who participated, 37% had reservations about marrying their partner until their partner’s debt was paid off. It is this report that prompted a debate on FOX News Channel’s ‘Your World With Neil Cavuto’. Guests for this LIVE debate on 2/13/14 included myself: Marriage Therapist/Psychotherapist Dr. Karen Ruskin, as well as guest Larry Winget. My blog article today will address the following: 1) does debt cause divorce, 2) should debt stop you from getting married, 3) solution resolution, 4) 5 underlying issues surrounding money within the couple relationship.

Does debt cause divorce?

During this debate on Neil’s show, Larry stated that money is the #1 cause of divorce. Which I know to be inaccurate. As a Marriage Therapist, I corrected this false assumption and myth on air. It has been my experience in working with couples for 20+ years, this is not the case. Do know that money as a so-called “cause” for divorce is impossible to calculate because it’s part of a larger group called “irreconcilable differences”. As I explained on air, money problems are often cited as the number one cause of divorce. But, research shows, study after study, that communication, not mutually prioritizing the relationship/lack of commitment, and infidelity are among some of the top reasons for divorce. Upon sharing this assessment, Neil proposed that communication about money could be a problem. I expressed that he hit the nail on the head. Indeed, money in and of itself is not the problem, that’s the “presenting problem”. Rather the problem is: a) how the couple communicates around money, b) how we use money, and c) how we see ourselves regarding money… Therefore the solution (rather than breaking up, if you want to remain with the person because you feel this is the right person for you to spend the rest of your life with) is to work out a financial agreement e.g., decide what to do/what works given your situation, not to just rule someone out of spending your life with them due to debt.

Should debt stop you from getting married? 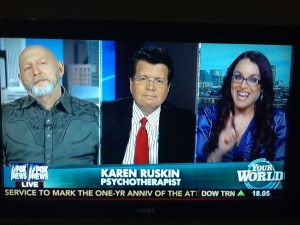 Since debt in and of itself is not the main cause of divorce, it doesn’t have to be debt that prevents you from continuing in a relationship. Debt absolutely does not have to stop you from getting married. During my on air debate on Neil’s show, guest Larry asserted his view point that you should not get married if the other person is in debt. Larry expressed that we should not take on another person’s debt. I understand the fear. And certainly we do not have to put our name on the person’s debt taking full ownership of it. But… as I asserted during this debate, and explained with clarity, ultimately that is exactly what marriage is! Marriage IS the taking on of someone else’s issues, e.g., debt, physical health, in-laws, etc. Everyone has some type of baggage. It is fantasy to think the person you are in a relationship with is a clean slate in all areas, and for some, money is the presenting issue. If we allowed debt to stop us from getting married, the already declining number of young people getting married (according to PEW research numbers have declined) will continue to decline.

Debt is indeed a stress for many. Money can bring up a lot of different issues in a couple relationship dynamic. Couples who are first starting out (e.g., right out of college with student loans), you both don’t have much. If I had a crystal ball, what I foresee if we lived the Larry way, we will be going back to a culture of marrying within one’s social class only. Or, we may never get married as we wait for our partner to pay off their debt. We would have more children out of wedlock, as the woman’s biological clock would be ticking while debt is being paid off, or there would be less families overall as there would be less marriages and therefore less children.

In contrast, couples who meet later in life, say in their 30’s may be a different scenario than the 20 something year old who is just out of school scenario. For example, if your 30 something year old partner has been irresponsible about how he/she spends money whereas you have been responsible, you don’t want to take on their debt and perhaps you are concerned about whether they will be irresponsible in other areas of their life. This is of course a valid concern. You can rule this person out if you feel it is an indicator for how they live in other aspects of their life and you don’t have the interest in working through this journey with them. Or, if you think it is a topic that can be worked through, or if it is a money issue only, then ask yourself the following question: can we work out a financial  agreement in advance? Decide if formulating with your partner a viable financial plan feels right to you and to your partner. A few menu items to consider if you desire to work out a plan is:

The topic of money and relationships interests many. As money is a significant part of our lives. How you deal with money, view money in and of itself and in relationship to self and others, choices you make surrounding money, and how you communicate about money all matters. It matters in terms of the emotional mental health and wellness of self and the mental health and wellness of your couple-hood relationship whole. Marriage, who to spend the rest of your life with, is indeed a special consideration. If money in and of itself is the ruler of all decisions, then the overwhelming majority of us would never have gotten married.