A Psychotherapist With A Voice: Opinion Piece – –

We expect children to communicate with intellectualism when in conflict with another simply based upon having a difference of opinion. We expect children not to use social media as an outlet to verbally assault others. Yet painfully I am all too aware from my own experience as a volunteer media source, as a Psychotherapist Media Guest Expert, that adults do not follow these rules. Social media is an easy outlet for adults to verbally assault other adults. Sadly, some adults use social media as a vessel of which to verbally war upon other adults, rather than having a healthy debate. This is the basis of my opinion piece today.

I have strong opinions about most topics in the field of mental health and wellness. I do not hold back from asserting my perspectives, which is based on 20+ years of working with couples, families, and individual adults and kids. I am a Psychotherapist/Marriage & Family Therapist who believes you must speak up as a mental health professional if you wish to make a difference. In addition to my professional self, my personal side of self is that I’m a mother, a wife, and just a regular gal. I wake up each morning, feed the family, throw a load of laundry in, shower, pack up lunches, get dressed for work, and I go about my day as do they. Sounds basic right? The typical working woman routine. 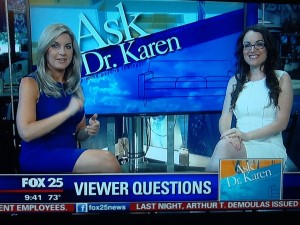 The part of my day that is not as common as some counseling professionals, is that in addition to my work as a talk therapist who provides counseling, and business owner of a preeminent counseling practice in Massachusetts, I am also a volunteer source for the media outlets to call upon when they desire a mental health guest expert. I am FOX News Boston’s AM and PM’s go-to Psychotherapist guest expert, and have a regular segment on FOX News Boston: ‘Ask Dr. Karen‘.  I often appear on national networks such as: FOX News Channel and FOX Business Network. In addition, I have also appeared on ABC, Discovery, Lifetime, and upcoming in just a few weeks: MTV. Being a media guest expert is my way of giving to the community as I am genuinely passionate about touching the lives of others. Being in the public eye is an opportunity not many therapists are offered, I see it as a gift. To be able to have the gift to touch many lives is the vessel of which media provides.

In the news we hear stories of bullying and how it destroys the emotional souls of children. The legalization of drugs is another hot topic in the news. What age children are to be left unsupervised is also a hot topic we are hearing much about with parents abdicating their responsibility leaving 7/8 year olds without adult supervision. These are just but 3 important topics that real people deal with in their lives of which is discussed on the news. 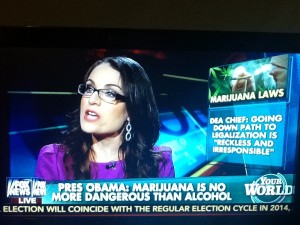 I shared on air on FOX News Channel’s: ‘Your world With Neil Cavuto’ my perspective that I’m concerned about the culture of our youth if marijuana becomes legalized. Furthermore I asserted on air that I would have stuck with prohibition. I received emails filled with venom and hatred toward me in reaction to what was simply my opinion based upon my experience in working with people as a therapist.

When I shared on FOX News Boston my concern in reaction to the news story about a 7 year old left alone for an extended period of time without adult supervision, stating there is a tremendous difference developmentally between an 11 year old left for short spurts vs a 7 year old left for several hours, you would think I said that the world should no longer be allowed to drink water. There was so much negative reaction on my Facebook page that got so nasty, attacking me and the public who wrote in that they appreciated and agreed with my perspective, that I actually deleted and banned some of the writers. As I felt that to be a bystander while my FB page was used as a verbal war zone for some parents to be social media bullies towards other parents was not acceptable to me. The topic: what age is it okay to leave children unsupervised is important, it was a valuable interview/subject to discuss. It is a shame that topics of importance for some adults leaves them to believe verbal assault via social media is an option. 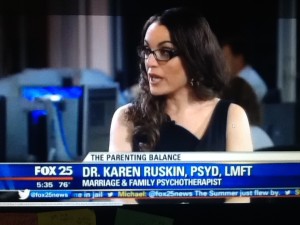 Being in the public eye, I will tell you that it is not easy when you share information that you know is helpful to people, that many people benefit from, and you are verbally attacked by some people simply because they have a difference of opinion. All it takes is just a few verbal attackers, or perhaps just one, that may affect someone from curling up in a ball and no longer asserting their perspective. I will continue to assert my perspective as I am very aware of the positive it does. The kind emails, blog commentaries, Facebook and twitter reaction is much appreciated. As I am reminded every day by the quantity of people of whom I am touching their lives in a positive way. The few and far between experiences I have of those whom verbally assault via social media and thus are nasty and loud, I remind myself, they are few and far between and I am helping many. Thus, I continue on, as my passion is genuine in my desire to play a role in making a positive difference. Some may say: “It comes with the territory”, in that I should expect vile from adults when in the public eye. I find the concept interesting that I volunteer my time to share therapeutic sensible insights and that I should “expect” that there will be some who rather than asserting their disagreement in an intellectual way, they will be backyard bullies.

When others have a difference of opinion, I am happy to discuss differing perspectives. Part of what makes America great is that we can voice our differing opinions. My blog, my FB page, my twitter feed, and debates on air, are all ways in which I support the opportunity to voice my perspective and hear others. What saddens me, what prompted this article, is when adults spew venom, are foul, are downright mean, nasty and verbal bullies using horrible language in an attempt to put the person down they disagree with. Rather than asserting themselves in a thought-felt manner. I do not allow others who are nasty to affect my voice, I do speak what I know to be right regardless. Others’ words do not affect my self- worth/concept. Though, I am an adult, so perhaps it is to be expected that my self-worth remains strong even though another says mean things. Though, I must share being able to literally delete and ban comments that are vile verbal bombs when made via social media (e.g., Facebook, twitter) helps. Nasty name calling and put downs is distressing in that it is a clear reminder that there are people who go to war when another holds a different perspective to them, rather than engaging in an educational debate. This is reality, verbal war. So, what happens to a child who has a baseball coach that says mean things? What about a teenager who has a classmate who is nasty after the student stood up in front of the classroom presenting their report that may be a different perspective then the other student? What happens to the young adult first starting out in their career who has a colleague who is negative towards them? How do we expect the younger folk to handle venom, and to still have drive to strive, if an adult with strong beliefs and confidence chooses to delete and ban the worst of the mean comments, for to leave them all is somewhat uncomfortable? The fact is, children are not the only ones who may hold their tongue if another verbally assaults them. I have met plenty of adults through the years who do not assert their point of view if they think it will be controversial. I am all for differences of opinion being voiced. I offer that forum via social media. There is a tremendous difference between intellectual written conversation voicing contrasting views vs. name calling and degrading words.

It saddens me that grown adults feel it is acceptable behavior to call another grown adult an “idiot” “stupid”, for example. These are the types of words that were used when I asserted on air and in my blog article providing 23 parenting tips to raise mentally healthy children in a mindful way, rather than allowing young children to be left alone for extended periods of time to fend for themselves. Adults attacking other adults who shared their agreement with me, calling them names, led me to make the decision to delete and ban those folks from FB and/or twitter so as to stop them from hurting others and spewing vile. I did not want to be a bystander of this. This is not cool. It is unbelievable to me what bully-ish behavior I see with adults through social media, and yet we expect children to be different. My mental health and wellness perspectives that I share with the public, based upon my experience, though from time to time I may tackle a controversial subject, and thus there will be others who disagree, is not an invitation to blast those with social media bullying behaviors towards those who agree with me, nor to be a social media bully to me. We are humans and hope that war can be stopped, prevented, and yet adults war with one another about an issue they disagree upon (e.g., the legalization vs. not of marijuana, what age children can be left unsupervised, Occupy Wall Street).

How we interact with others via social media tells us something about our character. I’m a person with a voice, and am hopeful others with a voice shall speak theirs with respect and fine character when it differs from another’s, so that we can live life respectfully of one another’s differences. Some mental health professionals button their lips out of discomfort that others will attack their views. And we are not the only people nor profession of whom far too many do not stand up for what they believe out of fear or discomfort in being verbally attacked by others via social media. There are children and adults every day with a voice about a wide range of topics. Not all people assert themselves due to the attack reaction, the social media assault from others.

This opinion article will lead some to respond with vile. For even the notion of suggesting we communicate with respect when we have differences of opinions will rub some the wrong way and they will in reaction choose to behave beastly.

In closing, the purpose of this article is simply to put out there the reminder to adults: having a difference of opinion is normal. How you choose to communicate that opinion is in your control. In my humble opinion, I suggest: choose not to verbally war with others. Rather respectfully and intellectually dialogue. Whatever the topic may be, and whomever this dialogue may be with. And, this article is a reminder for those who have a voice and are afraid of the response another may have if they assert it, to advocate for what you believe in.